Dateline Nebraska: On Bird Poop, Footloose, Using an Ironing Board as a Burglar Alarm, and Other Randomness From the Road

At 2 a.m. Saturday, I decided to get out of bed and lean the ironing board up against my hotel room door. If someone tried to open it, I reasoned, there’d be a crash! and I’d wake up. It was the first time in 12 days on the road that I didn’t feel safe.

That was two nights ago, and likely my imagination was getting the best of me. But my room was in a run-down hotel, in an even more run-down Nebraska city, and I was run down from trying to cram too much doing and driving into one day. The door to my room had a deadbolt under the handle, but not one of those long, u-shaped safety locks on top. And from the hallway outside of my room, I kept hearing a click-schlick, click-schlick, click-schlick at random intervals, as if someone was trying his keycard in all the different locks.

When you’re overtired and a binge watcher of both horror and true crime on Netflix, it’s not difficult to freak yourself out. One of my after-midnight thoughts, for example, was how the smooth green wallpaper above my my bed would make the perfect canvas for MURDER–in all caps, of course–written in my blood. (Think American Horror Story: Roanoke.)

The result was me not sleeping very well Saturday night. Yesterday was also a long day of driving from one side of Nebraska to the other, and right now I’m getting my oil changed

before heading South to Arkansas. So rather than try to write a compelling narrative of some kind, I thought I’d use my time waiting at the Walmart Auto Center to share some of my notes, experiences and observations from traveling. I keep my reporter’s notebook next to me on the passenger seat, so I can take notes and not forget anything.

So many thoughts come out of nowhere on the road!

Listed in no particular order, they cover roughly my first 2,700 miles, as I’ve gone from Connecticut, to Chicago, to Minneapois, to South Dakota, and then across the hilly Nebraska.

1. There are gophers everywhere! Driving through Florence, Minnesota–population 39–I got all excited and Ooooooh!-Oooooohed! out loud when what I thought was a prairie dog scurried in front of my car, across the two-lane highway. When I got to the Ingalls Homestead in DeSmet, South Dakota, I saw another one and learned from a staff member there that it was actually a gopher. Since then, I’ve seen them every day, every where. They’re very cute and look a lot like big chipmunks, as this video I took shows:

2. Birds in the midwest poop glue. Their poop also tends to be yellow, and it doesn’t come off within windshield wiper fluid or the squeegees provided at gas stations. The woman I was just chatting with at Walmart said bugs running into windshields is a problem here too. If I see greenish-yellowish goo, it’s likely bugs and not birds.

3. Between the birds, bugs and dust, my car has never been so dirty. In 12 days, I have washed my car three times, and I mean I have washed my car. If there is a full-service or Follow Charlie-type car wash in any of the states I’ve traveled through, I could not find it, and no one could direct me there. I’m proud to say that after some soggy mishaps, I can now wash my car using a long-nose hose and foaming brush contraption within the 6 minutes the first $2 in quarters provides.

4. There are more shades of green in nature than I ever imagined possible. And outside, on an endless prairie, or growing in patches along rolling hills, or dancing under the shadow of a clefted rock that reaches up and up and up, even a green that looks like what comes out of the mouth of a vomiting emoji is perfect and beautiful.

5. Every time I pass a car on a two-lane highway that runs between miles and miles of cornfields, I think of myself as being a female version of Kevin Bacon in the movie “Footloose.” It’s been DECADES since I’ve seen Footloose. I’m not even sure whether the town it’s set in has cornfields. But he was a happy rebel, and that’s what I feel like each time I zoom by a driver on their home turf.

6. Not every hotel that advertises wifi actually has wifi. Or if it does have wifi, it doesn’t have a router that gives a signal strong enough to reach every room. Ask when you check in. In one hotel, I was assigned to room 19, but the wifi only reached as far as room 2.  I was not pleased.

7. If you’re a coffee lover–as in a Coffee. Is. Life. type of drinker–you need to keep a box of Mini Moo’s in your car. You’ll never have to worry about having no choice but to use powdered creamer again.

8. Unlike in Connecticut, where people driving too slow in the left lane don’t seem to notice or care that they should make way and move right, those in Nebraska and Wyoming are most polite and conscientious. They move over to let you pass, and then shift right back. No road rage, no spite, no frustration.

9. Sometimes pretty things taste bad. Traveling along with me for many miles yesterday was a lovely yellow propeller airplane. It gracefully swooshed up, down and around in circles over the fields on either side of me, sometimes making figure eights. It made me think of Robert Redford’s character Denys in my all-time favorite movie, “Out of Africa,” and I could feel all the joy/love/the forever bond that he and Meryl Streep’s Karen Blixon felt as they flew in Denys’ small plane, holding hands, above the African plains. I, too, at that moment was experiencing a discovery of sorts, feeling joyful and delighted by all I was seeing, especially that pretty yellow plane …. Until it swooped down and, instead of expertly landing in the cornfield, let out a huge white cloud of chemicals that, even with the windows closed, I tasted.

10. Driving through Wisconsin, Indiana, Minnesota and South Dakota, it almost seemed as if each state has an assigned color for its cows. Yup, no more brown cows. Must be somewhere other than Minnesota. And who knew so many different colors even existed! Shiny bronze, charcoal gray, earth brown, sand white. Where were the brown- or black-and-white spotted cows I was used to? I also noticed that unlike horses, which seem to spread out and go their own way in the fields, cows clump together, standing in long lines along a fence, or in a row to all plop into a creek together. 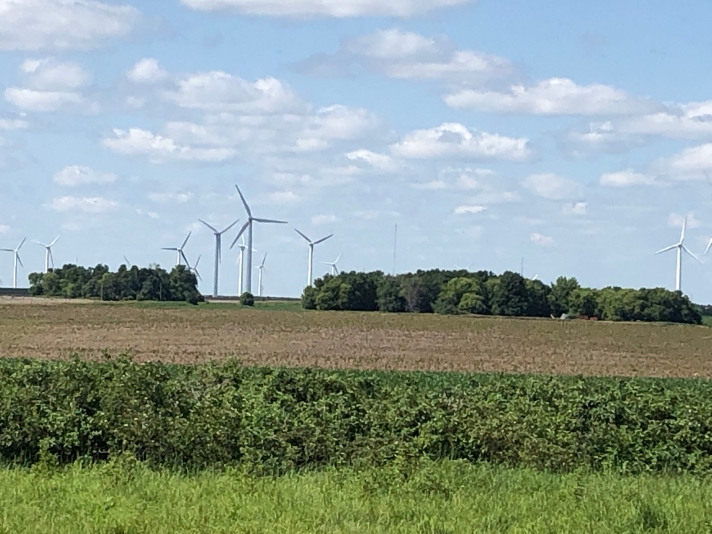 11. In the Midwest, trees are shaped more like East Coast shrubs, and they’re short! Or maybe they just look short, because there is so much sky. With no tall buildings or trees in the way, the sky here is HUGE. Endless. Look left, look right, look in front and behind you. …. Nothing but big sky, big clouds. And without anything but farms and nature as far as you can see, you are a part of it, rather than just under it. It’s really most magnificent and an awesome feeling.

Oil change done! I’m off to Arkansas! Bye for now.