#Hillgramage Part 2: Of course I wanted to use the Clintons’ ex-bathroom. I also donated a button to the Clinton House Museum.

If we know each other well enough that you sort of have an idea of how I think, you will not be surprised to learn that before I could happily leave Hillary and Bill Clinton’s former house in Fayetteville, Arkansas, on Monday, I needed to use the bathroom.

The need was partially a biological one. But more than anything, I couldn’t resist the opportunity to use the toilet, and wash my hands, in what used to be Hillary’s bathroom.

The toilet in what today is the Clinton House Museum is not the same as when the Clintons lived and got married there on October 11, 1975. But everything else in the bathroom is, including the fantastic window and antique fixtures you see here: 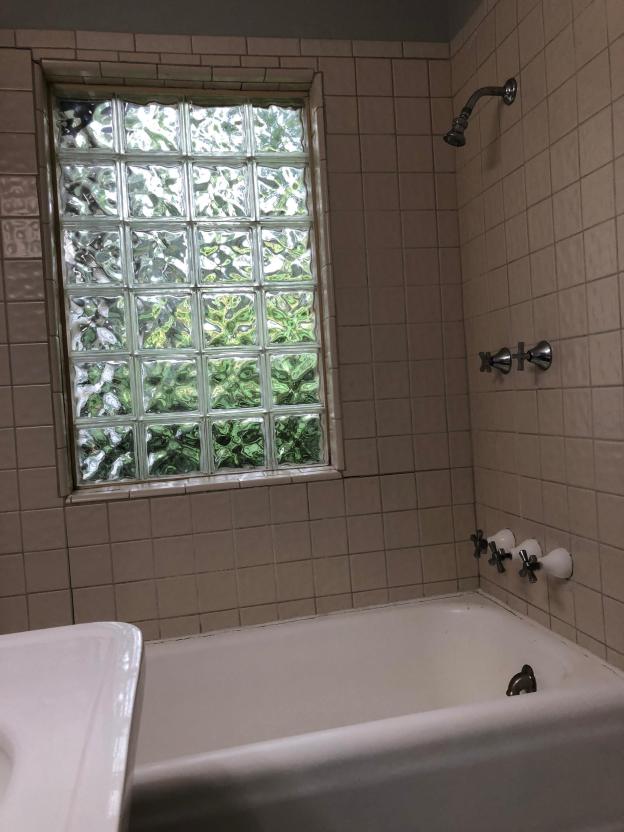 But what really made my day and Part 2 of my Hillgramage (Read about Part 1 here!) especially meaningful was the opportunity to donate a political button to the museum and leave a little bit myself behind. 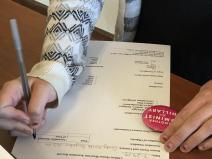 Before my road trip, I’d thought about gathering up and bringing to donate to the Clinton House Museum several of the signs, pins and other items I’d saved from volunteering and attending Hillary events during the 2016 President election. But then I figured they must have plenty.

What I discovered during my tour, however, is that while they have TONS of Bill memorabilia, they have only a smattering of Hillary items.

Apparently, we Hillary fans like to hold on to our mementos, finding more meaning in keeping them than Bill fans do. According to Clinton House Museum Historian Flannery Quinn, Bill is also much more popular in Arkansas than Hillary. Residents, apparently, still have not forgotten or become less outraged over her decisions to keep her maiden name or not spend time in the morning getting “fixed up” by coiffing her hair or putting on makeup.

“She was kind of a hippie when she came here to start teaching at the University of Arkansas and to be with Bill, very much happy and confident with who she was,” Quinn said. But when Bill lost his re-election bid for governor, she made the pragmatic choice to straighten her hair, get contacts and rid of the big glasses, and stop wearing long, flowery skirts.

“I like to think of that as the start of the pantsuit era,” Quinn quipped. “And one of the results was that the next time Bil ran, he won.”

I’ve heard people say that if it weren’t for Bill, Hillary would not have achieved all she has. I believe the opposite is true. He succeeded because of her.

But back to my donation of the button ….

My car sun visors are decorated with all kinds of buttons — political ones, inspirational ones, just plain pretty ones. One of them was this pink button from the Feminist Majority Foundation, which my friend Jacqueline Kozin wonderfully brought back for me from the 2016 Democratic National Convention. It’s been one of my treasures kept from the campaign. But when Quinn answered my question about whether they wanted donations of Hillary memorabilia with an enthusiastic YES! I went out to my car and unpinned it.

As part of the National Organization for Women and as a writer for Ms Magazine (published by the Feminist Majority Foundation), I’ve had the priviledge to work with FMF President and women’s rights rock star Ellie Smeal several times. A hero for justice and equality herself, Smeal and the FMF affect more lives for the better that really anyone is aware of. So I was thrilled to leave a button that would celebrate a triad of feminist champions — Hillary, Smeal and the FMF.

In talking with Quinn, I also realized that all those pieces of Hillary memorabilia at home that I did not pack up would be so much better suited in a place like the Clinton House Museum, which tends to include stories about how items were collected next to the items themselves.

“We want to show the meaning of the pieces in our collection, as well as the impact the Clintons have had on people’s lives,” Quinn said. 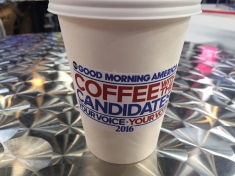 So when I get home from my road trip, I’ll be boxing up several items to send to her, including lawn signs, more buttons, stickers and–to some this may sound weirder than my desire to use the Clintons’ ex-bathroom–a used, but well-preserved, paper coffee cup. It was mine. I saved it from when I attended a live taping of Good Morning America with Hillary right before the 2016 primaries.

When I asked Quinn whether she’d actually want the cup for the museum, I was sure she’d make a this-lady-is-crazy-face while politely saying “no, thank you.” But instead she gushed, “Yes! Please! And make sure you include the cup’s story.” I’m psyched!

If you have Hillary-related items that you’d like to send to the Clinton House Museum, you can mail them with a note to Flannery Quinn at:

Yes, I paid $14.95 for a souvenir photo of me sitting at what was his actual desk in a reproduction of the Oval Office during his presidency. Drawn to his bookshelves (I always love to snoop through people’s books) I was excited to see two first editions of Connecticut resident Harriet Beecher Stowe’s “Uncle Tom’s Cabin.” If you’ve never visited the Harriet Beecher Stowe Center in Hartford, you’re missing out on something special.

I could write thousands of words about what I discovered at both the Clinton House Museum and Presidential Library, but instead I’ve uploaded photos with captions to Google. Please scroll through and then leave me a comment here, by hitting reply at the bottom of this post! I love all the comments that people make on Facebook in particular, but it would be great to keep them all collected in one place, so that all can see and consider.

Currently, my #WhereSheIs road trip has me in New Orleans until Saturday morning with one of my oldest and best friends, Carolynn. At left are us last night on Bourbon Street.

Soooo much to still write about and catch up on from earlier parts of this road trip. Amazing landscapes, people and discoveries in so many unexpected places.